MONEY TROUBLE: DO YOU KNOW HOW TO SPOT BOGUS BILLS? 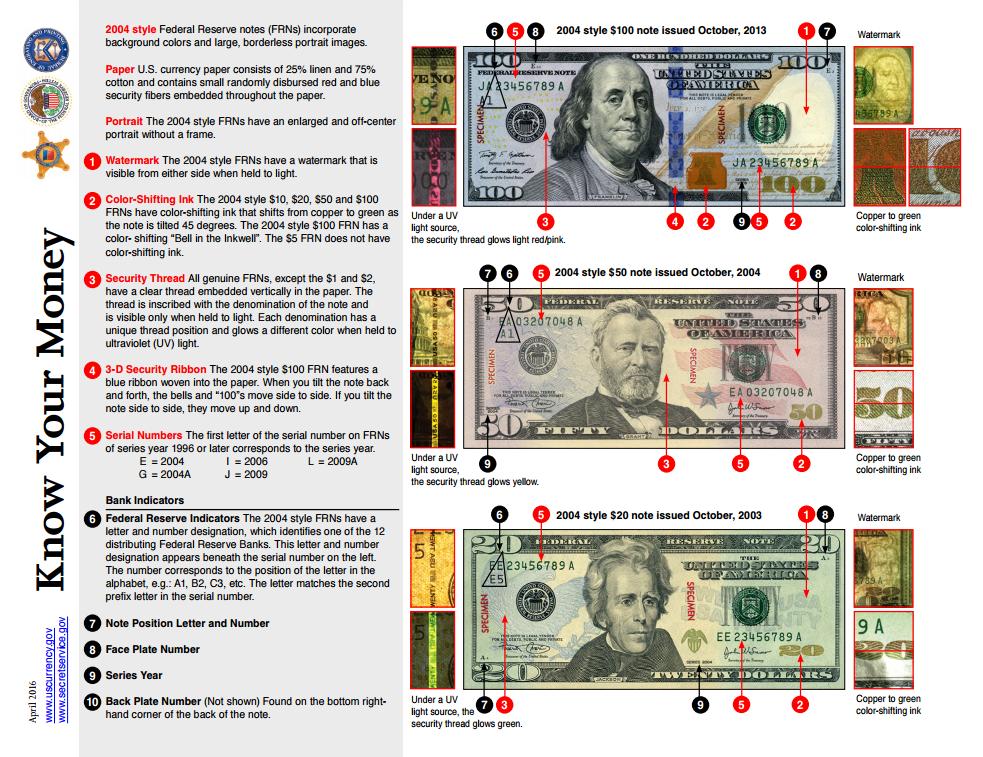 A customer paying with a bogus bill typically doesn’t make headlines, and it’s certainly not something that somebody should lose their life over. But the fact remains that counterfeit currencies are a common occurrence for retailers, and being able to tell good from bad can make the difference in what happens next.

When it comes to handling money in a business, the first point of contact is usually the cashier. This makes it necessary for businesses to train cashiers on how to detect fakes. According to Fraud Fighter’s How to Detect a Counterfeit $20 Bill, the $20 bill is the popular choice of forgers inside the continental USA. The Jackson is popular with domestic criminals because it’s a common bill dispensed by ATMs and is not usually examined with the degree of scrutiny of larger bills, Secret Service officials say.

Fortunately, there are several distinguishing characteristics of genuine U.S. currency that counterfeit detectors use to catch discrepancies that are undetectable to the naked eye. Some of the easiest areas to identify counterfeit bills include:

Paper: Real bills have tiny red and blue fibers embedded into the paper. Many counterfeiters try to fake these through various methods that include using cat hair and printing fake fibers into the bills, but with a quick examination these fakes can be spotted.

Watermark: One of the most difficult parts of a bill to forge is the watermark. Watermarks show a shadow of a portrait when you hold an authentic U.S. bill up to the light.

Security thread: Genuine U.S. dollars have security threads built into them to protect from counterfeiting. Look for a woven thread that runs from the top to bottom of the bill. These security threads are not printed onto the actual paper, but are designed into the underlying paper that they’re printed on.

Each $20 bill produced after 2003 contains a plastic strip embedded just to the left of Andrew Jackson’s portrait — it reads USA TWENTY and includes a small flag. If the bill is held up to an ultraviolet light, the security stripe glows green — if it’s legit.

Color shifting ink: This is a feature that has been added to the newer U.S. bills that were produced after 2006. One of the advantages of this feature is that it cannot be replicated with laser printers. To spot them, look to the lower-right hand corner of a bank note. Look at the printed numbers and tilt the bill back and forth. Depending on the angle you view the bill from, you can see the color shift from grey to green and back.

Counterfeit pens are another popular option for detecting fake bills. The concept is pretty simple — The pen contains of iodine that reacts with the starch in wood-based paper to create a black stain. The “paper” that US bills are made is a blend of 75% cotton and 25% linen. There is no starch at all in a genuine bill. When the iodine solution is applied to the cotton-and-linen-based paper used in real bills, no discoloration occurs. If the ink turns a dark brown or black, don’t take that bill.

Counterfeit pens are inexpensive and provide quick results. It’s important to note, though, the the are not certified by the U.S. Treasury. So, while it’s a good start, a good visual inspection and knowing what you are looking for can be the most effective tool you have.

For more details on identifying counterfeit bills, The Secret Service offers a downloadable PDF called Know Your Money that points out key features to look at to determine if a bill is real or fake. https://tinyurl.com/fakebillguide

You’ve Found a Fake; Now What?

The U.S. Department of Treasury advises that, if you received counterfeit currency bills, contact your local police department or your local US secret service office. Here are their guidelines, taken from their website:
• Do not put yourself in danger.
• Do not return the bill to the passer.
• Delay the passer with some excuse, if possible.
• Observe the passer’s description – and their companions’ descriptions – and write down their vehicle license plate numbers if you can.
• Contact your local police department OR call your local U.S. Secret Service Office.
• Write your initials and date in the white border area of the suspected counterfeit note.
• DO NOT handle the counterfeit note. Place it inside a protective cover, a plastic bag, or envelope to protect it until you place it in the hands of an IDENTIFIED Secret Service Agent.
• Surrender the note or coin ONLY to a properly identified police officer or a Secret Service Special Agent, or mail it to your nearest U.S. Secret Service field office.

Of course, if one of your employees detects and confirms the counterfeit after the transaction, use video surveillance or any contact information given to give a profile to the police.

It might seem like overkill to contact the local authorities over a counterfeit $20 bill, but if you’re the employee, you put your job at risk for missing on fake bills. If you’re a business owner, you’re taking a loss and potentially putting your business’ reputation on the line if you give a counterfeit bill back from the register.

At your discretion, you can also choose to just not accept the counterfeit bill and end the transaction there to avoid any escalation. But whatever you decide, stay firm in your decision and don’t let emotions take over. It’s always better to be safe, than sorry.

The CoolFire Z80 is an 80-watt mod that features a replaceable 18650 battery. There are two impressive modes in the CoolFire Z80: F0 mode and

White House Staffers Suspended for Marijuana Use    Several White House staffers were asked to resign, were suspended or are working remotely after revealing past marijuana use

Americans are ‘So #@$%ing Ready’ for Ordinary Moments to Return

As COVID-19 restrictions continue to lift, Groupon surveyed more than 2,000 people across the U.S. and not surprisingly found that the majority (71%) of Americans are ‘So