The Allure of a Claw Machine 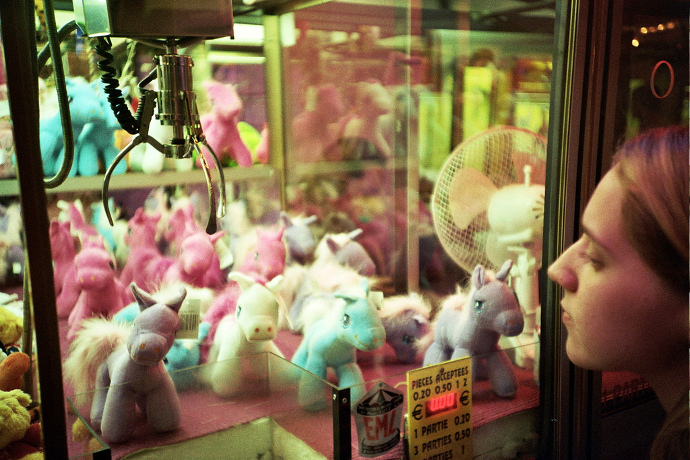 Who can resist the allure of a claw machine? They’re straight up magical. Disagree? Name another machine that can take cheap, useless items we otherwise wouldn’t think about twice and transform them into the laser-pointed focus of our obsession. Anyone? Unless you guessed “labeling machine at a Beanie Baby factor,” you’re stumped, and you should be. There’s just something intangibly awesome about glass boxes and robot arms.

But why are we even discussing this? Did HQ just shift its focus from smoke shops to roadside carnivals? No, we haven’t.

We just know that if you want your brick and mortar store to compete in today’s world, you must pull out all the stops. Like a carnival, you’re selling an experience just as much as you’re selling a product, and we have it on good authority that a claw machine can help you with both.

“My claw machine paid for itself within the first year,” says Shana Wilkinson of Smokey Shay’s in North Carolina. “It’s one dollar to play and I stuffed it with all kinds of things that I get on the cheap; silicone slicks, silicone pipes, lighters, I have little stuffed animals holding hemp leaves . . . all kinds of things in there. It is set for one win after 20 plays. It’s a math game and I always win in the end. The machine pays for itself, the prizes pay for themselves and the crowd goes wild.”

Yes, you read that correctly. Modern claw machines are rigged. Take a moment to absorb that and please accept our apology for destroying your childhood delusions. While we’re at it, Santa Claus isn’t real, George Washington didn’t cut down a cherry tree, and your vote for president only sort of counts. Also, something about a grassy knoll.

Not all of the machines out there are rigged, though.

“We have a really old machine,” says Devin Jefferson of Crazy Martin’s in Piqua, Ohio. “The manufacturer tag was 1963 . . . long before they had them rigged to make it more profitable. Ours is a skill master . . . if you have your hand-eye coordination on, you can pretty much grab anything that’s in there. It’s just really difficult.”

So, it’s your choice. Kick it honest and old school or rig it to ratchet up the profits. But before you do anything, be sure and check your local rules and regulations. There are laws on the book governing this sort of thing in multiple regions. You don’t want to give Johnny Law another reason to harass you.

Even without rigging, though, Devin swears by his machine as both a profit-churner and a magnet for extra foot traffic.

“It’s a really unique draw for the store. People will drop five bucks in the machine and when they lose, they’ll turn around and buy something.”

In fact, he argues that leaving it solely as a game of skill is a better approach. “People need to know they can win. If there’s someone in the group who’s mastered the game, their winnings will inspire everyone else to take a turn. It’s still not easy to win, so even at just $.25 a turn, we come out on top. It’s paid for itself over and over and over. I only paid a couple hundred for it in the first place, and I can guarantee you there’s a good $200 in there as we speak. “

“But claw machines are for kids,” you might counter. “We sell to adults.” Yes, this is indisputable. You do sell to adults; a whole generation of adults who love their X-boxes as much as their kids, never miss an episode of Rick and Morty, and participate in cosplay events unironically.

Now, think about it. That two-dollar silicone pipe might not draw much attention in your case. But put it in a glass box with a robotic arm, and watch your customers line up for a chance to take it home. Furthermore, you’re not just selling that silicone pipe. You’re selling the opportunity to win it, which means that one item can garner it’s selling price multiple times over.

But as Shana pointed out, silicone pipes are just the beginning. They’re perfect because they’re small and inexpensive, but the options are virtually limitless. Any small, low-priced novelty item in your arsenal will do. Got outdated stock that you can’t move? Throw it in the machine, even if it’s a little pricier than the standard fare. Maybe no one will buy it off the shelf for $20.00 but put it in the claw machine and they’ll very likely spend that $20.00 trying to win it. It’s all about the experience.

That’s really what it comes down to; the experience. People can buy a pipe anywhere. They can hop on Amazon right now and grab just about anything you carry. But do you know what they can’t do on Amazon? You guessed it. They can’t have a visceral experience, i.e., win a prize from a claw machine.

Set yourself apart. Be what the digital stores can’t be and have some fun in the process.

Although CBD has been covered extensively in the media, and products have made their way to shelves in mainstream stores, most consumers have never

How a New Federal Law is Transforming Online E-cigarette Sales

Online sales of e-cigarettes and other vaping products are undergoing a monumental shift in the United States. The Preventing Online Sales of E-Cigarettes to Children

1 out of 4 CBD Products is NOT Tested

for Microbial Content, Pesticides, or Heavy Metals  The CBD industry’s peer-reviewed watchdog Leafreport.com recently undertook an comprehensive review of 2946 products from 136 brands to verify how

Who’s Among the New Cannabis Consumers?

One in four Americans currently consume cannabis, reporting they’ve tried some form of cannabis within the past twelve months. What’s more, 23% of current cannabis

Smoke shop community sees sweet success with imported snacks and sodas      Marijuana and the munchies? Come on, some things are a given. If your

Get Customers Excited with a Flash Sale

At a time when businesses— large and small — literally spend over $300 billion a year on customer loyalty plans, new research shows that retailers who have

Thoughts on The MORE Act and How the GOP Let Us Down On Friday, December 4th, 2020, Congress made history when the House of

5 Tips To Choose The Best Rolling Papers For Smoking Cannabis

When it comes to smoking cannabis, some say the greatest joy is rolling your joint perfectly. Whether you are a pro smoker or only beginning

Tips for Making it Through Another Manic Monday

You’ve got orders that need unpacking, shelves need restocking, the phone is ringing with constant calls from vendors, a pile of invoices require your