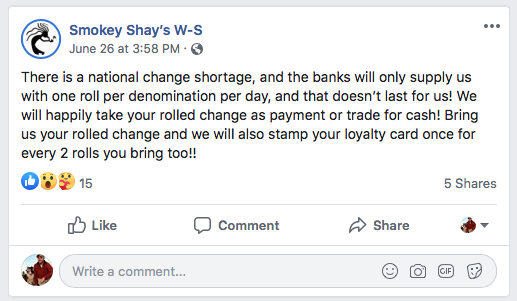 Shanna Wilkinson is begging for change.

Wilkinson, owner of Smokey Shay’s, in Greensboro, North Carolina, is one of many smoke shop owners affected by the coronavirus pandemic. But it’s not lack of sales, which she says have been “stellar.” The challenge Wilkinson and other retailers are experiencing is in their ability to make change  for purchases.

Last month, the Federal Reserve issued a statement saying that the coronavirus pandemic “significantly disrupted” the supply chain and normal circulation patterns for dimes, nickels, quarters, and yes, even pennies.

In a hearing before the U.S. House Financial Services Committee, Federal Reserve Chairman Jerome Powell told lawmakers that the shortage was caused by the circulation of coins grinding to a halt during the coronavirus outbreak.

“What’s happened is, with the partial closure of the economy, the flow of coins through the economy has kind of stopped. The places where you’d go to give your coins and get credit and get cash — you know, folding money — those have not been working,” Powell said. “Stores have been closed. So a whole system of flow has kind come to a stop.”

In response, the Fed began to ration its coin supply on June 15, giving banks a portion of their requested change supply depending on what they had historically requested.

“We are only allowed one roll of change per denomination per day,” Wilkinson said. 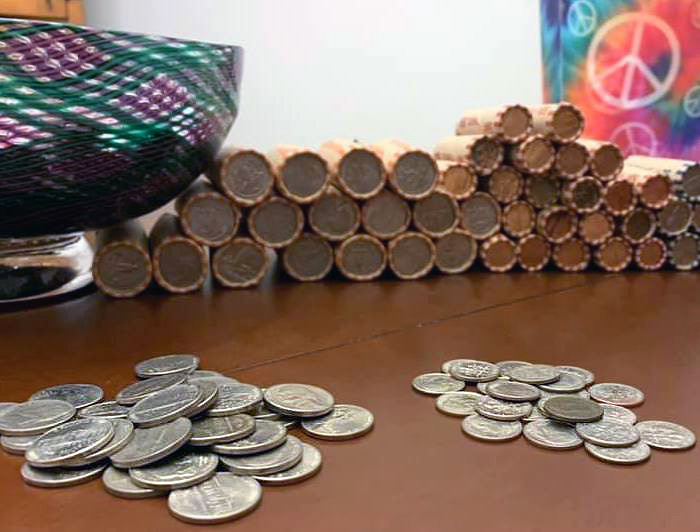 During the first three months of 2020, just over 3.2 billion coins were produced, the lowest level since 2013, according to CoinNews.net. The Federal Reserve is working with the US. Mint to maximize coin production capacity, “And encouraging depository institutions to order only the coin they need to meet near-term customer demand,” according to the statement.

The strategy will remain in place as long as necessary, a Fed spokeswoman stated, pointing out that change needs to begin circulating through commerce for things to go back to normal.

In the meantime, businesses are asking customers to break into their piggy banks and dig through the couch cushions for spare change. Smokey Shay’s is encouraging customers to help them make change by offering a trade —- one punch of their loyalty card per two rolls of coins.

“We scrounged up over $500 in rolled change,” Wilkinson said, “but that will only last maybe two weeks, so we will have to put out another post for more.”

White House Staffers Suspended for Marijuana Use    Several White House staffers were asked to resign, were suspended or are working remotely after revealing past marijuana use

How to Stop Burglaries at Your Smoke Shop

A Google search of “smoke shop burglary” over the past month brings up 30,600 results! What are you doing to protect you business during these

Congress Amends the PACT Act to Apply to All Vaping Products.

Seller of Cigarettes or Smokeless Tobacco Required to Register with the Bureau of Alcohol, Tobacco, Firearms and Explosives. Background on the PACT Act As part of